STOP MEGA CORPORATIONS LIKE UBER FROM THREATENING OUR DEMOCRACY! The latest threat to working families is coming to San Diego!

Join workers, politicians, activists as we converge from around the nation to Stop ALEC in San Diego, July 22, 2015 at 3pm and 5pm! The event will start with a rally and then a march from Embarcadero Park North to the Grand Hyatt Hotel (Harbor at Kettner).

We must stand together to protect our families, our jobs, and communities!

WE NEED CRITICAL MASS AT THE HOTEL AT 5:o0PM on JULY 22. Drivers are being asked to line up or drive by and honk at both locations if possible (Embarcadero and the Grand Hyatt). MANY OTHER EVENTS ARE PLANNED BUT PLEASE TRY TO ADD YOUR PRESENCE TO THE GRAND HYATT HOTEL AT 5PM AND SPREAD THE WORD TO OTHER DRIVERS!

Through the secretive meetings of the American Legislative Exchange Council (ALEC), corporate lobbyists and state legislators vote as equals on ‘model bills’ to change our rights that often benefit the corporations’ bottom line at public expense. ALEC is a pay-to-play operation where corporations buy a seat and a vote on ‘task forces’ to advance their legislative wish lists and can get a tax break for donations, effectively passing these lobbying costs on to taxpayers.

1. Out of State Politicians who are on vacation here with their millionaire and billionaire friends should be back home working to make the lives of their constituents better, not scheming with lobbyists how to make their lives harder.

2. But ALEC has spent hundreds of thousands of dollars in corporate lobbyist money on this vacation for politicians and corporate lobbyists so they can come up with a new round of bills which will harm America’s families.

3. The result of this junket: dozens of bills will be written by ALEC and forced into law across the country with no input from the voters whose lives will be affected.

4. These bills are nothing more than a way for the rich and powerful to squeeze every last dime they can out of families like ours all across the nation.

5. We do things differently here in California and are a model for the nation, and it’s time we stand up to ALEC to let them know they are not welcome here.

Participating legislators, overwhelmingly conservative Republicans, then bring those proposals home and introduce them in statehouses across the land as their own brilliant ideas and important public policy innovations—without disclosing that corporations crafted and voted on the bills.

ALEC boasts that it has over 1,000 of these bills introduced by legislative members every year, with one in every five of them enacted into law. ALEC describes itself as a “unique,” “unparalleled” and “unmatched” organization. We agree. It is as if a state legislature had been reconstituted, yet corporations had pushed the people out the door. 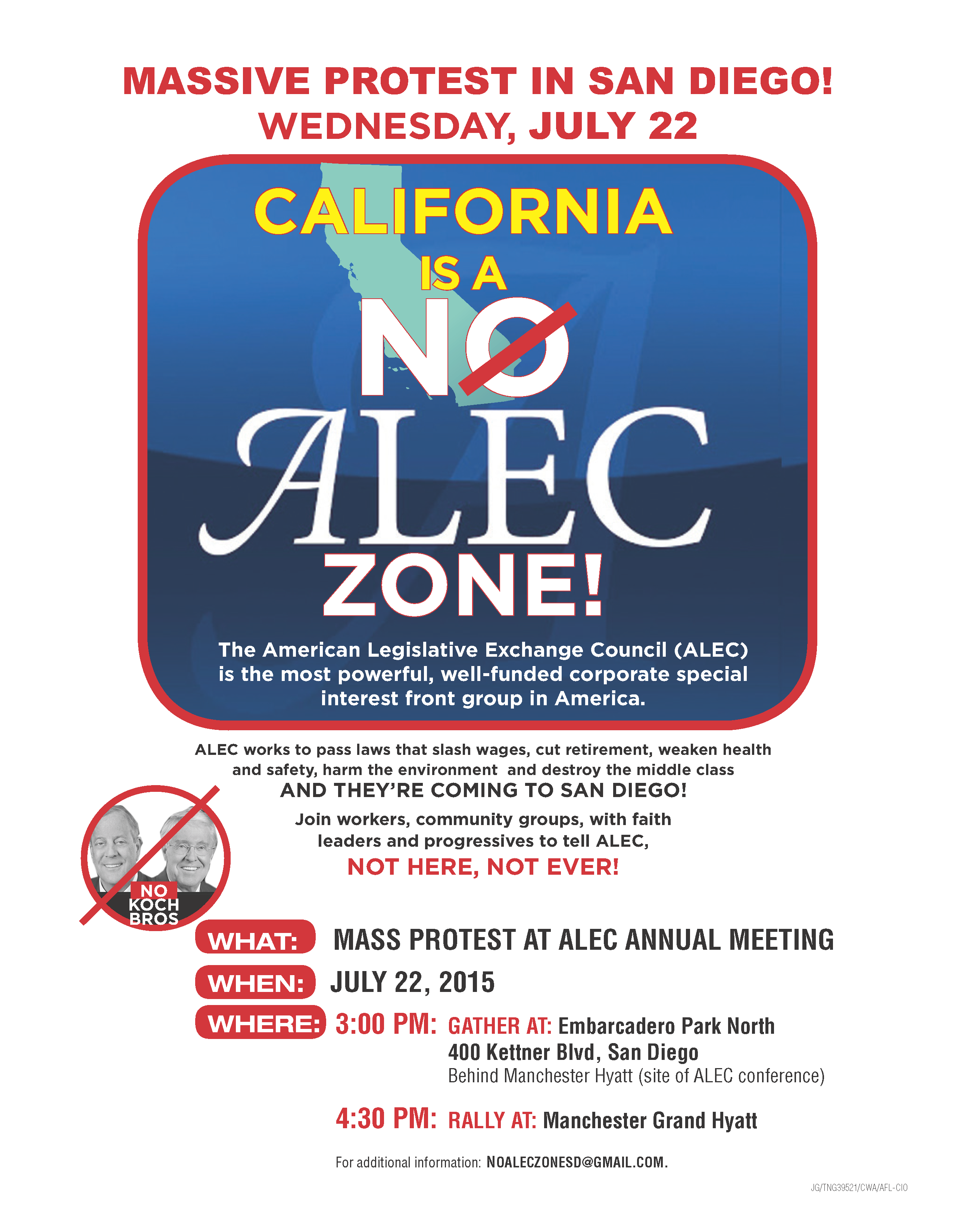